Skip to main content
You are here: Home Discover Experience the port Cycling in the harbour Ruigoord route

This longest of the four harbour cycle routes produces the greatest contrasts. The illustrious artists' village of Ruigoord borders on a company that stores petroleum. And further on you can cycle from a centuries-old duck decoy to a cycle path with state-of-the-art, climate-neutral lighting. 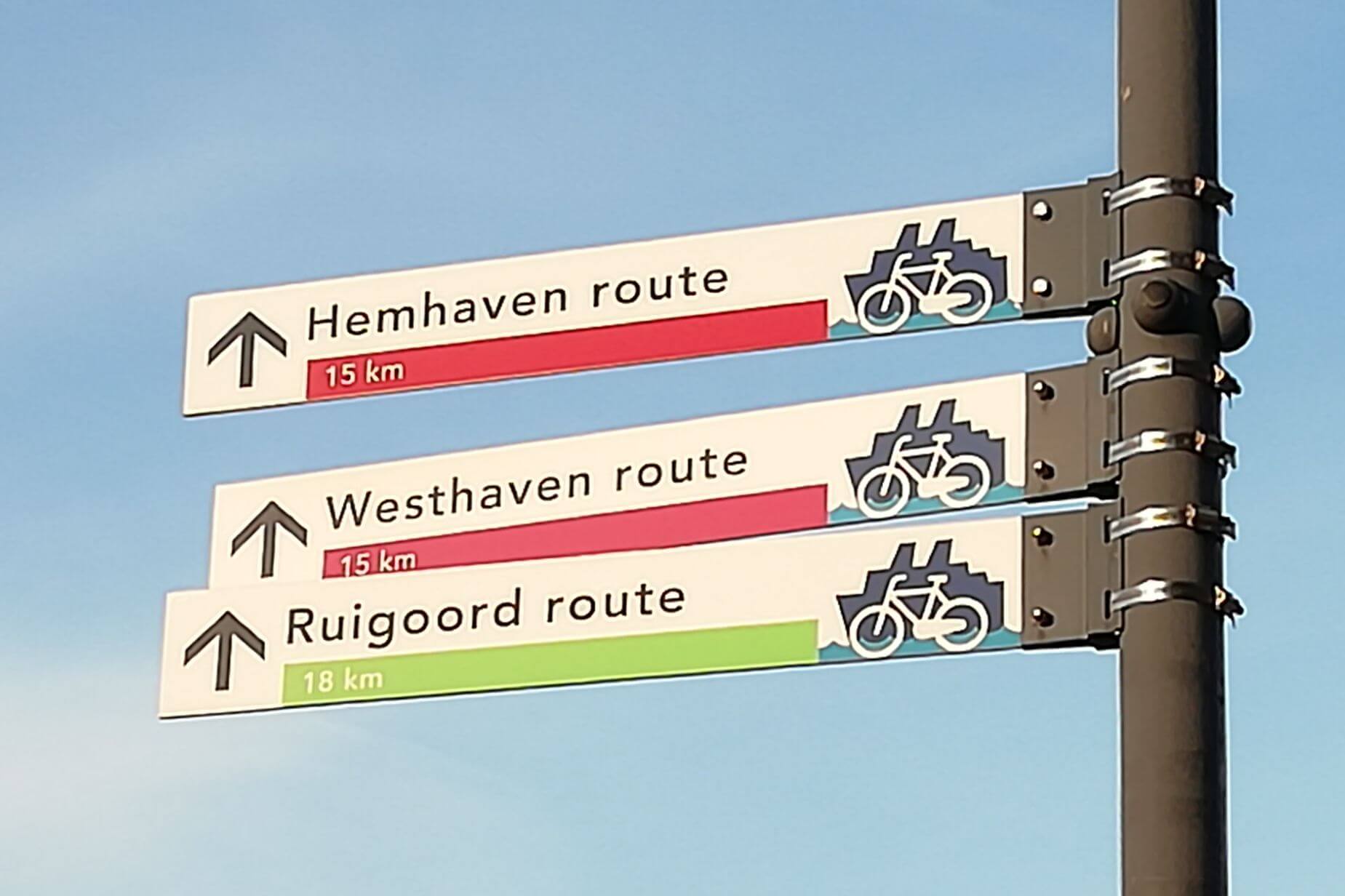 This is where you cycle by

What you'll see along the way

Rather cycle a shorter route?

The bee orchid is very rare, but there are dozens in the harbour. There are a few broad-leaved helleborines - a species you also encounter in the rest of Amsterdam. Hundreds of marsh helleborines grow in the harbour, and even thousands of southern marsh orchids.

The place where this illustrious artists' village is now located has had a special status for a thousand years. The first signs of human habitation date back to the 11th century. At that time, this region consisted of small rivers, swamps and peat bogs.

Over the centuries the IJ formed an inlet in the country, the Houtrak. In the 16th century an island arose here: 't Aeylandt Ruygenoort. The Houtrak was reclaimed in 1873. Because of this, Ruigoord was no longer an island.

At this time a village was built here for people from Zeeland and West Friesland who came to the new polder to work on the land. In the sixties of the last century the villagers had to leave. The area would become a port. It didn't get that far, because of the oil crisis.

The empty village was squatted and this is how 'cultural free port' Ruigoord came into being. Ruigoord became a household name among artists and 'joy masons'. Many artists lived there or came there often, such as writers and poets Hans Plomp, Gerben Hellinga, Simon Vinkenoog and Diana Ozon. Singer Armand married there and actor Daniel Boissevain grew up there.

In 2000 Port of Amsterdam built the Afrikahaven. The village has been preserved, but it is no longer allowed to live there. Ruigoord will keep its cultural destination at least until 2027. The festival Landjuweel is still popular.

Royal Vopak is a storage company for petroleum products and chemicals. The company has a terminal in the new Afrika port for the storage, transshipment and processing of petrolates.

The site has 41 tanks with a combined capacity of over 1.2 million cubic metres.

When a green area was created on the edge of Afrika port, something special was discovered here: the remains of a duck decoy from 1652. We used to use such a decoy in Western Europe to catch ducks for consumption. It is a shielded piece of water, containing a kind of trap, a 'catch pipe', in which the ducks could be driven to catch them.

The port of Amsterdam and Stichting Het Eiland have rebuilt this 'duck decoy of Ruigoord'. Not to eat the ducks, but to show visitors what our ancestors did centuries ago to get food. Young people who don't make it through regular education are working on this. They can release their energy in the open air and learn something in the meantime.

This cycle path in the Westelijk Havengebied has street lights that are not connected to the electricity grid: they get their power from solar panels in the water next to it. That has three advantages. In the water, the panels can easily rotate with the sun. Moreover, the water cools the panels and reflects the light. That provides extra power.

The grid has a different type of electricity (direct current) than the normal grid (alternating current). Solar panels generate direct current. Normally you place an inverter between the panels and the grid, which converts the current into alternating current. This is actually a shame, because you lose some of the power. In this closed grid, such an inverter is not necessary.

A small windmill completes the energy supply. The lanterns themselves have low-energy LED lamps. And so there is enough energy to keep the lamps on. Cyclists who have an app for this cycle path can decide for themselves how bright they want the lights to shine. If you have the app on on your phone, the lights in your neighbourhood will shine as bright as you want.

This cycle path is an experiment by the port in collaboration with Luminext, an Eneco company.

Wind near and far

Between the Haarlemmerpoort and Halfweg there are several pieces of green landscape that actually form one whole: the Brettenzone. This area is part of the famous General Expansion Plan of Amsterdam from 1935.

The plan was a green zone from the Western Garden Cities to the harbour area. During implementation, however, the focus was more on housing and port expansion. In between, a fragmented area remained.

Here you will find all kinds of pieces of greenery, including the Westerpark, for example. Remains of the city's history can also be seen here. The first draught from the Golden Age, for example, and the oldest railway line in the Netherlands, as well as the Westergasfabriek. And four allotment parks: Groote Braak, De Bretten, Nut & Genoegen and Sloterdijkermeer.

The modern version of the Silk Road begins on this railway line. For centuries it was a trade route over land from China to Europe. When the shipping industry started to emerge, this route was used less and less. Now the route is revived, but by rail.

In cooperation with various transport companies and the Chinese government, a direct train connection has been made. The route starts in the port of Amsterdam and goes through Europe to Russia and then via Mongolia to the port of Yiwu in the Shanghai region.

With the new Silk Road, Amsterdam, our country as a whole and even surrounding countries can do better business with China. From Europe, cars and long-life food such as milk powder can get to China faster. And electronics, such as telephones, can reach us quickly by train from China.

The route is 11,000 kilometres long, and the train takes 16 to 18 days. That makes transport by train faster than by ship and cheaper and more sustainable than by plane. What's more, goods from the port can also reach Scandinavia and the United Kingdom quickly.

In Prodock, innovative entrepreneurs are given the space to start new products and businesses. And not so much hip apps or other typical start-ups, but rather the bigger work. There's a company here that processes flax, hemp and lime into building materials and even the frame of a hip scooter.

Prodock offers these companies a workshop, office and outdoor space. Prodock also takes care of cross-fertilisation with the other companies in the port, so that new collaborations can arise. In this way, we want to contribute to innovation in Amsterdam and the region.

The Netherlands has been good at building ships for centuries. Royal Van Lent continues that tradition at a top level. This company builds luxury yachts entirely to measure, from bow to helicopter deck. The company has been doing that for years, but the shipyard here in the harbour is new. This port is there to build even larger yachts, because that is the trend in the world of luxury yachts.

Royal Van Lent works together with a number of other shipyards in the top segment under the name Feadship, which is a recognised training company. Many young carpenters, yacht painters and mechanics have learned the tricks of the trade at these shipyards. In this way, the company is once again building on the shipbuilding expertise of the future.